Guns are the ultimate epitome of thrill – they are loud, action-packed, and fast-acting. Although all these things are the attraction behind having a gun, there are very real reasons why they are also dangerous and must be handled with caution. Airsoft Guns are the perfect alternative to the real firearm, as they give you all the benefits and features of a real gun with the added advantage of safety and security.

An airsoft gun looks and fires exactly like a real firearm, but it is called airsoft because it essentially fires air. That means that the bullets in the airsoft gun are made of paper or plastic shells and they are fired through a gas cylinder that propels the bullets. If the price is considered as a factor then you needn’t worry; you can find reasonably priced Airsoft Guns for Sale at almost half the price of real guns. They can be used for every normal gun function other than killing people. The fire from an airsoft gun at close range can injure you but they are hardly ever fatal which makes them much more suitable for an array of different situations.

What Are The Uses of Airsoft Guns?

When you think of guns, you immediately think of action-packed, dangerous situations like war or police work, but airsoft pistols are a great alternative for different functions;

Other than the firing of ceremonial rings with flaming arrows, the shooting of guns have been used as the official practice of signaling the start of games and tournaments around the world. The Olympics use gunfire to start swimming and running games, racecar matches use gunfire to start the race as well.

They are traditionally part of almost all competing games, but real gunfire poses the risk of misfires, an aerial drop of the bullet, injury, and even death. To replace that risk, airsoft pistols have begun to be used in races to mitigate the risk of injury, as it sounds, and even smokes like a real gun to signal the start of a race.

This may seem like a trifling issue, but firing guns to celebrate weddings, festivals and happy occasions is a very prevalent part of the global culture. Guns are fired on the 4h of July as well as the celebration. The danger is with stray aerial bullets that land on passersby that can be quite risky. Using cheap airsoft guns instead helps cut that risk while maintaining the festivities without any serious casualties.

If you are practicing self defense you want to know how to use a gun for your safety; you can always opt for an airsoft gun instead of a real one to learn the firing technique and proper usage before buying a real gun. Once you have command over the weapon, it’ll be easier for you to operate a proper firearm, which makes airsoft guns the perfect self-defense training tool.

Drill training and gun firing is a crucial part of military training. Every soldier has to go through rigorous training to learn to handle and fire guns, especially for snipers and gunners. Training is extensive and can be pretty expensive considering how much training is required for a platoon to learn firing and how essential guns are to military training. Airsoft sniper rifles can be replaced with real guns in target practice and drill training. It would cut the budget of training as well since such a large amount of firearms are used in the military.

Everyone in law enforcement knows how to shoot a gun as it's part of their training as police officers to know how to use a gun for tackling criminals. Police training also involves firing simulations and target practice. Police forces also use police dogs as part of the force on fieldwork, but dogs get nervous around loud bangs and they are trained in active shooting simulations to acclimatize them to the sound and panic. These simulations are also trained to tackle gun holding hands to attack active shooters. Using an airsoft shotgun instead of real ones also avoids accidents and helps train dogs for police work.

Action films heavily feature guns and dangerous weapons. Usually, in action scenes where guns are used, there are unloaded guns used for filming the sequence, or CGI is used to replicate the shooting scenes for the realistic effect. This effect can be achieved with airsoft guns as a replacement for film props.

In 1993, while filming for his film ‘The Crow’, Brandon Bruce Lee, the son of legendary martial artist actor, Bruce Lee was accidentally shot to death on set by his co-worker during a scene. Dummy guns were supposed to be used but the crew used hollowed shells of a real gun instead of fake ones. To avoid such fatalities, there are hundreds of cheap airsoft guns available which are ideal as props and much safer to use to avoid injury and death.

There are so many legendary characters that sport guns and people love dressing up as them for Halloween or Comic-Con. Indiana Jones, Scarface, Rambo, or Wild West icons like Jesse James and Butch Cassidy; but using real guns for dress-up is expensive and extremely dangerous. Various dummy guns are used as costumes but they are made up of fake cheap materials that ruin the authenticity; to experience the authenticity of dressing up, quality metal airsoft guns are a better option that won’t compromise your safety and also give you the proper look you want for your dress up.

Speaking of authenticity, the stage is the ultimate realistic experience presented to audiences with dramatic flair and real-time action. Using guns on the stage is dangerous as people are in close contact with each other, but using airsoft guns allows for a realistic feel with smoke and sound that ensures the safety of the performers as well as the audiences.

Who doesn’t love collecting cool and awesome things to show off to their peers? Like other weapons, guns are also a very popular collectible item and people have a real hobby of not just using but collecting various models of impressive guns. But purchasing a real gun is a pricey affair, which is why you can satisfy your habit of collecting guns by buying airsoft versions of famous guns instead. They would cost much less and will be just as good as the real deal.

Where to Buy Airsoft Guns at a Reasonable Price?

Using an airsoft gun rather than a real one is not a new concept, just an evolved one. With gun laws getting stricter and various political movements calling for a ban on widespread gun ownership, it makes sense that there should be viable alternatives for people to responsibly use and own guns. There are a plethora of the best airsoft guns available in the market that doesn’t violate licensing and gun ownership issues and lets you own whichever gun you like as long as safety is not at stake. Take a look at some of the amazing wholesale airsoft guns available for purchase from the comfort of your own house.

If it is recreational shooting games you are interested in, you can get quality CO2 airsoft guns that have gas propellers which are safer for recreational shooting and self-defense training. They are easier to hold and easy to use, with the added benefit of avoiding casualties, if you’re an amateur gun user. You can buy a good quality gun like the 394 FPS Licensed Smith Wesson MP 40 CO2 Airsoft Pistol, For the real gun enthusiasts, the actual attraction is to own advanced versions of guns like machine guns and rifles.

But these guys are normally a couple of hundred dollars, which is expensive if you’re a collector. You can get affordable and authentic-looking airsoft rifles for far less than they usually cost and satisfy your gun firing obsession without hitting your budget. At the unbelievable price of $49.99, you can get a badass looking, military-grade Camo M4 M16 Airsoft Electric Semi-Auto Assault Rifle, while maintaining your budget as well as your love for awesome guns.

For the fun cosplay lover in you, there are literally hundreds of options of fancy airsoft guns to choose from. If you’re going for the Wild West theme, you can experience that bravado and macho persona by selecting the perfect Old West Black G36B Spring Powered Airsoft Revolver to complete the authentic cowboy experience.

Since training and practice is one of the most common uses of airsoft guns, there are different ranges of airsoft guns you can buy that like the M1911 Pistol with Mock Extension and Laser which is perfect for target practice and improving your aim, thanks to the laser and better handling grip due to the sleek design of the gun.

Now that you know everything you need to know about airsoft guns; with safety and affordability in mind, you can purchase potentially any model of airsoft gun you want. You can keep the experience of firing guns alive without having to worry about restrictions, accidents, or expenses. 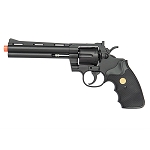