Are Batons Good For Self Defense?

There are multiple kinds of weapons that you can use to keep yourself safe. But some are more suited to practiced professionals rather than civilians for street crime. In the case of batons, they are almost always exclusively used by law enforcement and the military. They are the kind of tools that aid in upholding the law or ensuring extra security when you’re tackling difficult people. A baton in itself is a simple rod that you can use to counter, block an attack or use on someone for self defense. But law enforcement officers spend months training how to make the right use of them. On the other hand, if you do decide to use them for your safety, there are ways they can prove useful. They can be used for striking someone and tripping them if they charge at you. They can also work well for disarming someone if they whip out a weapon on you as well. It depends more on the person using the baton if they can conduct proper self defense with it.

If you do want something simple and low maintenance as a weapon, it would be great to use a baton. It is easy to keep in your car or take along and it does not cause any issues lying about. Unlike some of the other high-maintenance weapons, these will not pose a risk to anyone. You can actually make good use of them if you are know-how. With a self defense baton, there are actually some moves that can work really well for you.

For starters, when you use a baton, you need to build up your upper body strength. You should be able to swing it around and use it with as much force as possible. If you hit the right part of the body in defense, you can actually counter your attacker much better. In a street crime situation, you don’t have time for an elaborate game plan. In such cases, it's better if you are swift and use the baton where it will cause the most pain. In a robbery or theft, hitting the criminal on their head or their neck will slow them down. It might also push them to drop whatever they were trying to get away with.

In cases of street crime like assault, kidnapping, or violence, batons can be stealthy but useful. You need to make sure the rod hits the more sensitive parts of the body. Since a good hit from the baton can cause blunt force trauma, bruising, and concussions, they can deter criminals.

Types Of Batons And What They Can Do

Despite what you might think, batons are not just simple sticks. They are made from special strong materials so they can withstand repetitive use. They are also made to resist a lot of pressure and will work well if you don’t have anything else on you. But there actually are different versions of batons in the weapon categories as well.

You have the basic nightstick which is used by all kinds of security personnel. It looks like a small walking cane as it is a rod that has a small angle holder on it as well. You can hold it and turn it around when you are using it to defend yourself. This is usually more for night watch and for keeping something in you during patrol. It is not the most important weapon, but it is a tool that can give you instant protection and confront the criminal you might have to deal with.

Then you have the spring baton, which is used mostly by police and high-end entourages as well. This version of the baton is built differently as it is thinner from the top and thicker from the bottom. It helps you hold the baton with more grip and swing it around with more force. The spring lock technology means you don’t have to keep the length of the baton on you. The baton is actually collapsible and with a button, it springs open fully to use when you need it.

Another version of the spring baton is something that is more manual but still pretty slick. You can also find the expandable baton, which is a collapsed version but usually larger as well. You might have seen police use this as a first resort to subdue suspects and runaways. The famous expression around this move is, “baton to the knee”. The expandable baton closes into a small stick which will expand into a full stick when you jerk it with your hand.

What Is The Best Self Defense Baton For Women

Even though many people might think batons are not suitable weapons for women, they can be. Think about it; most of what women have to endure on the street has to do with physical violence. If there is an expandable baton that can be easily carried when you are out, that would be great. These batons are easy to carry in your pocket or purse and can cause real injury to any predators or assailants.

In addition to going for the knee, batons can be good if someone corners you. They are hidden weapons that can be whipped out and charged at sloppy criminals. You can defend yourself against unwanted advances by hitting on the head, neck, elbow, shins, knees, and even poke the stomach. You can actually make good use out of an expandable baton if you don’t want anything technical for self defense.

While there may not be many queries of batons in the local market, you should still be able to get one. The most top-grade batons used by police are the ones that can provide you much defense as well. If you want to find the best police baton, you should look up PA Knives. Our store is well-equipped with the most impressive weapons you will need for self defense. Whether you are an officer or a civilian, quality weapons are what we pride ourselves on. 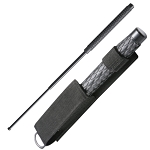 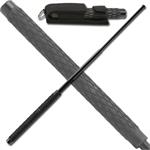