Everything You Need to Know About Bo Staff

The world of weapons is exciting and vast, there are variations of different fighting weapons that have been in use for centuries that continue to be used in fighting practices and have developed different uses over time. The simple, yet versatile Bow Staff or Bo staff is one of them. The use of the Bo staff as a weapon is said to have originated in Okinawa, Japan in 1477. The emperor Sho Shin was ruling the island and he banned the use of weapons to maintain peace among the civilians while also maintaining his military rule. That led to the civilians feeling threatened and wanting to keep something to protect themselves against pillagers and attackers. Most of them were farmers and were quite helpless against the highly-trained army without any weapons.

Since there was a ban on weapons, the civilians were forced to come up with something creative. They started using long sticks made out of bamboo or oak which were used on farms to carry water up and down the fields and hike in the hills. Since these staffs were sturdy and flexible, they decided to fashion them into a fighting staff which could be used as a self-defense weapon in case of attack. This simple instrument later became a popular part of Japanese martial arts and many fighting techniques emerged around the humble Bo staff. It is still used as a rural domestic tool as well as a certified fighting weapon to this day.

Why Should I Buy a Bow Staff for Self-Defense?

While it might seem silly to buy a big wooden stick to protect yourself there are a few reasons why the bo staff can be the most simplistic and helpful tool to master. So if you’re looking at options of bow staff for sale, you should know why that’s a good idea, and here is why;

Given that a traditional martial arts staff is a low-cost weapon, you can find many affordable options in design, color and length variations if you’re looking for a Bo staff for sale according to your liking. If you don’t have a preference or you don’t know where to start, you can look for the basic wooden staff which is available in varieties like the 26-inch Plain Rattan Escrima Stick or the Deluxe Rattan Escrima Stick which is your traditional wooden staff used in the Philippian fencing martial arts. You can find these wooden staff for sale for as low as $5 to$8, which is less than you would typically spend on a single breakfast, but it is a one-time buy which will pay for itself since it can be used to practice different martial arts techniques.

What are the Different Qualities of Bo Staff and What is it used for?

You should also know the quality of wood used to make the bo staff weapon which will determine how you wish to use it. If you are going for a Bo staff as your weapon of choice, then you will learn to fight at a distance and utilize the staff for its maximum capacity. There are different types of wood used to make these Bo staffs that determine how you can use them for fighting.

What’s the Difference Between Tapered and Straight Bo Staff?

It doesn’t make much of a difference in how you use the staff since all variations of the Bo staff will allow you to keep your attacker at a distance and let you strike them with great force. But there are subtle advantages of different fighting staff and their shapes. If you use a normal length of Bo staff then you have a greater chance of swinging and hitting as a longer staff is more flexible and whips harder. As opposed to that, a quarterstaff is shorter but will allow you to hit your opponent harder and allow more grip over the staff and better movement, it is essentially used for thrusting and direct hitting rather than poking or whipping.

Similarly, a tapered Bo staff like the 72” Tapered Red Oakwood Bo Staff will be easier to hold from one side and will also allow you to swing it more generously, the wider end of the staff stays tighter in your hand and the thinner end causes a greater whiplash. If you are learning the Swiffer techniques in staff fighting, then many people prefer something like the 72” Red Oakwood Toothpick Bo Staff which is thin and fine, it is easier to grip in your hand and even easier to swing around which makes it ideal for some high-speed fighting techniques.

While many weapons have been created which are far more sophisticated than the humble Bo staff and maybe more lethal as well, it is much more discreet and that is always an added advantage. If you know how to use a Bo staff for self-defense then it is a good idea to keep a Bo staff at home or in your car. It is incredibly easy to disguise a Bo staff as a decorative stick such as the Burnt Rattan Escrima Stick it can easily pass off as a home décor item due to its elaborative carving and seemingly non-threatening shape. But in case of emergencies or break-ins, a bo staff like that can help you face and tackle intruders, robbers or harassers quite easily.

There are more complicated weapons in martial art especially which are far more lethal and scary, but most of the martial arts techniques and moves are focused more on inner energy and presence of mind than the fancy properties of its weapons. If you’re new to the self-defense game, it makes more sense to start yourself off with something like the Bo staff, which is simple to handle and can be used to practice various martial arts techniques.

Fighting Bo Staff for Self Defense

It doesn’t matter which martial arts culture you’re using as reference, each of them has their way of using a fighting bo staff for self-defense and there are so many different moves you can learn with a simple bo staff which can come in handy in various situations. The element of surprise is always an important aspect of self-defense as well as martial arts itself. Learning fighting techniques with a Bo staff can become a hidden talent that no one knows about except for someone who makes the mistake of messing with you.

Other than self-defense, there is a prevalent culture of martial arts very much alive in various parts of the world. In Central Asia, martial arts is still a part of the school curriculum and military training; the bo staff is the stepping stone through which the most basic fighting techniques are learned and they are pretty much the staple weapon and tool for anyone who practices martial arts as a sport. Given its simplistic design and the diverse fighting techniques that can be practiced with the staff, it is an athlete favorite and allows one to master different fighting tricks with it. If you are considering buying a bo staff, you can now go ahead and buy one knowing everything you need to know about these badass and humble fighting staff. 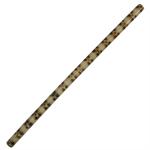