Who in the United States has not used or experienced a gun in any way? But there is a glaring risk factor that seems to have only grown with time. With the increase in amateur gun use and resulting accidents has led many people to reconsider the thrill around toting guns. But apart from abolishing the whole idea, there are multiple innovative solutions for the safe and proper use of guns. Front firing blank guns are a relatively newer concept many people are ready to get behind. They are the safe-shooting, replica versions of actual guns that can replace major recreational and unnecessary gun use going on right now.

The main feature of blank guns is in the name, where they actually shoot blanks instead of dangerous metal bullets. They were made somewhere in the 1840’s but didn’t come into prevalent use until very recently with rising gun safety issues. With time, more people started realizing that there are ways to shoot guns without causing chaos every time. Front firing blank guns were invented as decoy weapons that could substitute the use of recreational firing and incidental uses. And to this day, they are becoming more prevalent because of how safe they actually are.

The Changing Tide Of Gun Use And Blank Guns

Nowadays, the issue of safe gun use is bigger than ever, and probably a good time to popularize blank guns too. Since there are more ways that people can envision and use guns, there also has to be a good alternative as well. For everyone who likes the shoot to thrill blank guns can emulate the same experience without the heavy-duty technicality. Toting guns is not a joke and it should be taken as one either. Blank guns are actually the right way to tackle the rising issues around gun-related crime and accidents. Most of the time, the issues related to gun accidents are delivered by inexperienced people experimenting or trying their luck. Guns on the other hand are unforgiving and the damage is irreversible.

More and more people then began campaigning for safe gun use and the blank gun now has become the alternative. There is actually not much reason to use a real gun other than defense, hunting or criminal activity; one is illegal, the other is occasional and the first is licensed and mandated. Any other obsession or attraction to guns can be curbed with the use of blank guns instead. They are safe to shoot and are made to replicate the results of gun shootings without dire consequences.

The Mechanism Of The Full Auto Blank Gun

Contrary to popular belief, blank guns are not toy versions of real firearms. They are actually proper replicas of real guns matched to the last detail. The real difference between a real gun and a blank is the bullet or cartridge. Unlike a real bullet, blank bullets are firstly made from softer materials than metal. Secondly, they contain gunpowder that is propelled through the blank gun to smoke and bang like a real gun. The trigger or shooting system in a blank gun is usually a spring, electric, or gas-powered canister and propeller. It is usually filled with CO2 gas that propels the gunpowder and creates a realistic cracking shot without the piercing metal bullet.

The way that the full auto blank gun emulates the real firearm is in the sound, smoking as well as the outlook. But if you want to make sure you’re being safe, a blank gun often has an orange cap at the end of the barrel. More importantly, blank guns stay safe because they have an obstructed barrel. You cannot modify a blank gun to shoot a real bullet even if you tried and that keeps them safe. You can shoot a blank gun from a distance or close enough and their shot will not be nearly as injurious or fatal as a real gun.

What To Use Replica Blank Guns For?

Other than observing responsible gun use, why would blank guns be a regular thing at all? The answer to that is in every decoy weapon activity you can think of. There is actually a lot of use you can get out of blank guns than you might think.

For starters, the fact that they look exactly like real guns means they are excellent movie and stage props. They are used to lend authenticity as well as realistic presence to suspense scenes that use weapons. They can smoke and bang like a real gun and maintain the sense of an actual weapon without endangering anyone with stray bullets. Cheap blank guns are cost-effective substitutes for prop guns that maintain the integrity of on-screen and on-stage performances.

One constant tradition in many cultures is celebratory gunfire to commemorate holidays. In other ways, guns are also part of sporting events where they signal the start of races and tournaments. In both cases, though, blank guns are a better alternative to use as they cut the risk of stray bullets injuring and killing innocent people. They are also perfect for celebration and maintaining sporting traditions with their realistic and complimentary firing and sound.

Believe it or not, blank guns are actually also heavily featured in police and military training. Since they are decoy weapons, they are used in battle and police field simulations to train troops and officers. The blank guns allow for learning proper techniques as well as a strategy at a rookie stage.

Buying Blank Guns At A Good Price From PA Knives

Blank or real, we all know buying guns is an expensive affair. More often than not, a single gun can cost you a few 100 dollars. If you are buying a blank gun, it can be pretty pricey if you are getting it in a place that doesn’t have many options. But at PA Knives you can get front firing blank guns wholesale, unlike your local markets. Choose the barrel you like and pay less without compromising the experience. 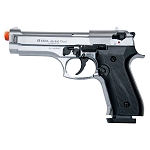