How To Find Cool Swords In These Times?

In this day and age, it might seem like an impossible task to find any kind of sword, let alone good ones. They seem like such a thing of the past that it may not occur to use that they can still be used or made. Contrary to that belief, swords are not only made but are used and still pretty special to many. The question is, how to find cool swords in these times? The answer is also simple, the internet will never disappoint when you need to get them. But even if you look through your local market you will find a couple of pawnshops or antique stores. They usually have a large collection of swords that belong to actual soldiers or passed down from generations. In some cases, these swords might be too expensive as well but they are also worth it.

Looking For Different Types Of Swords

If you are a sword enthusiast, then you already know they are incredibly impressive weapons. They are still one of the most influential inventions and they continue to impress. But even within the sword category, there are so many awesome swords you can look for. You will find a list of blades ranging from antiques to collectible to fantasy swords that people like. They are all made to be as impressive and alluring as the next and are still revered just as much. Here are different kinds of swords people still like to find and collect.

If you look at the history of weapons and warfare, swords are definitely top of the list. They were one of the first weapons to be created and have been used for centuries. Whether in battle or in the nobility, swords have a special place in warfare and honor. Being able to swing a sword and fight with it was only an honor for the best and bravest soldiers. Even now, military swords are a source of great honor to soldiers and their families. You can find antique as well as replica swords that are affiliated with the history of the military.

The idea of being able to use a sword has already been mentioned. But there are some swords in history that have become even more impressive now. Samurai and ninja swords are the two most ancient weapons in the history of martial arts in Asia. These are long, thin, and extremely sharp blades that require a heap of talent to master and use. Any soldier that could swing samurai and ninja swords were considered invincible. It is one of the highest honors to this day to be able to use and command a good samurai and ninja sword. Nowadays, they are a cultural phenomenon that people adore and desire to acquire for some status. They are also one out of two swords that are still used to teach actual sword fighting techniques.

Who amongst us has not wondered and been fascinated by the Euro[pean Medieval gothic era? One of the most memorable things about this time was the idea of knighthood and brave conquerors. In this great age of war and conquest, swords were the solitary symbols of power, nobility, and reign. Medieval swords are well-known for being ornamental, gilded, decorated, and incredibly coveted. Legends of King Arthur and Knights of the Templar are just some stories that immortalized these swords. It is not surprising that you will find multiple versions of these blades, both authentic and replica, for sale.

Anime Swords For Collection And Dress Up

Compared to other sword lores, anime swords are one of the most recent trends in sword history. They are derived from the famous Japanese series and video games based off of animated films and stories. There is actually an enormous fan base for anime which includes people who love anime merchandise. You will find a plethora of swords that are replicated from anime characters, heroes, and villains. They are quite famous among gamers and geeks who like to collect swords from their favorite anime shows and games. They are used for dress-up as well as conventions and sold at swap meets between fans of anime.

Real Swords In Use To This Day

There is a lot of fantasy and fiction at play when you think about the craze around swords. They are all derived from one story or tradition or another. But since there was a prevalent culture of using swords for the longest time, they are classic weapons that have their place. Within that space, there are actually some swords that we use even now in sword fighting and to learn some sports and hobbies. Katana swords used in martial arts are one kind, then there are the rapier swords used for fencing. You will find actual swords at sporting stores as sporting goods since they are used in these principles. Thousands of people learn these principles to fight or as a hobby and they have proper institutions to teach them. But another unusual way that swords are part of our life is as accessories.

The idea of the walking cane also comes from European culture, specifically English. A walking cane is a staple accessory and has been for a while in Europe. But for many enthusiasts, a unique item to cherish and use would be a sword cane. It is a long sword that has a solid stick scabbard that acts like the cane for walking. It can be used as a weapon but is mainly for showing off and giving you a distinguished look. These swords canes are classic accessories and are still coveted by collectors and dandy people.

What you really need to know is where to scout all these amazing kinds of swords in one place. If you look online, as mentioned before, you are sure to find them in droves. You should check out PA Knives, the best wholesale sword store in the USA for all kinds of impressive blades. Imagine getting a high-quality, authentic blade at a bargain within the comfort of your own home. 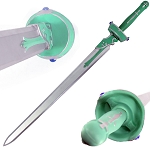