How To Use A Machete? The Blade For Every Cut

The normal perception around big blades is that they are used in killing sprees and inciting violence. The image of the machete has undergone a lot of transformation over the years. So let’s look at the different ways machetes are used and what changed around their cutting ability to be deemed badass. A general machete is a large fixed blade knife that is only slightly smaller than a sword and usually curved. That curve is what has made its shape and purpose distinct and multi-functional for the most part.

The real machete was originally used by Native Americans and indigenous people as farming tools. They were excellent for digging the ground and harvesting crops when they were ready. Machete also helped in establishing agricultural structures in farms and making sure the canals were lined. At the same time, the length and sharpness of the machete also worked really well as a hunting tool. Communities who survived hunting used them to catch food and prepare it for eating. In many tropical regions, machetes are still used as the main blades for all sorts of domestic and community-based errands.

But the real affiliation of machetes actually comes from Malay culture and other small tropical regions. A version of the machete blade was used by the army to fight in self-defense. Instead of fancy weapons, these long blades were used on horseback or on foot to tackle the enemies. After that, machetes also became really common with gangs and other clubs that would feud within the city.

The Machete Weapon As It's Used Now

Even though there are so many weapons to use now, machetes are still very common. Since they are part of numerous cultures, they continue to be used in the domestic and agricultural sense. But the machete weapon is also just as popular because it is classic and powerful as a blade. Just the fact that it can measure anywhere from 10 to 25 inches in blade length is evidence enough. On top of that, there is also the fact that they are really sharp and meant for cutting through even the toughest materials.

While you might not find machetes as the most common choice of weapon now, they can be useful. If you do train yourself with some basic knife fighting, you can wield a machete to your advantage. In a threatening situation, a machete can be overpowering even gun holders because it's large and menacing. You can disarm your opponent if they are holding another weapon and also counterattack in multiple ways.

In rural life, and indigenous places, machetes are still just as indispensable as they were years ago. In certain countries like India, Malaysia and even parts of America like Hawaii use them in their daily lives. Machetes are good for breaking down tough fruits like coconut and taro and harvesting crops. It also works well for hacking large brambles, vines, and weeds off of healthy farmlands.

Other than that, machetes are actually also used in states where hunting is common. People who live in colder areas also use machetes for cutting wood and building fires almost every day. As a hunting tool, machetes can be really powerful for hunting even the biggest animals like deer, bison, and venison.

Machete Tool As A Power Tool

Survival training is something that has just come up on the horizon but it is crucial. Many people believe that we may have to actually live in a time where we may have limited resources and will survive off the wilderness. Keeping this in mind, there is a lot that a machete can do for you as a survival and adventure traveler. It can help you build actual shelters and proper living quarters as well as source food and water. You can make sure that you ward off dangerous wild animals and also hunt if you need to, to sustain yourself.

If you think about machetes as a tool, it is also really useful in camping. It can help you source firewood and prop up tents. If you are on a hiking trail, a swing of a machete can clear the pathway off tough brambles and tall grass. You can also use it to hike up complicated paths where it may be challenging to venture off otherwise. As a hiker and camper, a machete can be the best tool you can carry to take care of all the small nuisances that will come your way.

Cool Machetes In Films And Merchandise

Despite some stereotypical depictions of some cultures carrying machetes, they are showcased in a lot of films. Machetes are undeniably cool and at the end of the day, one of the most badass weapons you can swing around are these. They are larger blades that already have a fear factor attached to them and are seen again and again being used as props in movies. Where there are films, there are also fans, and many people like collecting movie props and collectibles.

Some well-designed and ornamental machetes are also available for collection if you look for them. Since machetes have a long history of spanning many cultures, you can find decorative ones as well like swords. They are meant to be collected and showcased and are more displayed and less for use. In that event, people who like weapons can actually find multiple machetes that might also look great as collectibles. But you will be hard pushed to find the same kind of variety in local stores. You might get the traditional versions but they will be few and far in between. But if you want to know where can I buy a machete that’s also unique, try our PA Knives online store. We host an amazing collection of machetes suitable for survival training, fighting, self-defense as well as collection. You will find affordable blades that are also high-quality and impressive. 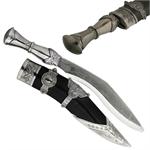 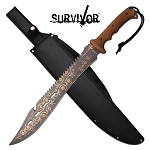