Taser For Sale At PA Knives

We are living in some seriously unpredictable times right now. With that in mind, being on your guard is an instinct we should all develop. To make sure that there is always a helping hand to our safety, more people are investing in tasers now. They have been around for a while now but more tasers are now becoming mainstream self defense weapons. Where you might find some in your local market, PA Knives offers the best taser for sale collection you will need. If it's personal safety at risk, accessibility to these devices should be a priority. There are more options in one place in our online shop than you might find anywhere else.

For those of you who have not used a stun gun taser or a device like that, this might seem strange. They are electroshock weapons that stupefy or temporarily paralyze a criminal that tries to harm you physically. They were used for a while by only professional fighters or law enforcement. But when you look into it, tasers are now becoming major self defense weapons because of their efficacy. They have actually been proven to be quite useful to the public as they are easy to operate and sustainable.

On the face of it, the whole idea of using stun guns is pretty straightforward. They are pushing and point weapons that require good aim and a little presence of mind. In terms of the mechanism, they are battery-operated, remote control-like devices built for easy use. You just need to switch them on and use them on a person you want to deter. But in the case of stun guns as well as tasers, what are some things you should take care of?

What You Should Do?

What You Should Not Do?

The Efficacy Of Stun Gun For Women

One of the main reasons that stun guns got popularized is because of their use by female civilians. Many women reported life-saving incidents where tasers stopped someone from harming them. Building on that, more stun guns are now directed at women as the main customers. Keeping that in mind, you will find the regular pink taser in the market more often than you think. It is usually disguised as a cell phone cover or a makeup case. It is stealthy, effective, and also really easy to carry wherever you might go.

Another piece that is very popular with women is a mini taser. It will be sold in the shape of a jogger ring that is also known as a sting ring. You can wear it while you are out and about the town and stay on guard if something happens. It's also really easy to disguise as a fitness gadget and can provide concealed protection at all times. Other best-selling items in this category are a keychain taser as well as a lipstick stun gun. Both these devices are discreet and quite effective against even the slightest mishaps.

Since many of the harassment, assault, robbery, and kidnapping incidents happen at night, they are more threatening. You can opt for a stun gun flashlight that can empower you to even maintain safety at night. Many of these flashlight stun guns also come with alarms so they can add another layer of security.

All these and dozens of amazing stun guns are available at PA Knives for your protection. Take the decision to help yourself today, opt for the perfect stun gun at great prices. 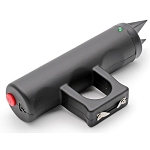