When it comes to looking for stun guns for sale, look no further as PA knives offer a variety of stun guns for your self-defense needs. The stun gun is a gun that is capable of stunning your enemies by the high voltage of current you deliver when you pull the trigger. The current delivered from the stun guns is enough for bringing anyone down to their knees. Alongside the current delivered, the stun guns produce a large sound that alerts everyone around and you can have someone come to your rescue in no time.

Self defense is very important in today’s world because of the street crimes that have increased gradually. And when it comes to self-defense you need to be equipped with the right equipment. And one such item that proves lethal in self-defense is the stun gun. Stun guns come in a variety of designs and colors, some notable mentions include the police stun gun, cell phone stun gun, keychain stun gun and even stun gun flashlight. All stun guns are unique on their own and always produce outstanding results when it comes to protecting yourself or your loved ones.

Now that you are aware of what stun guns are meant for, let us talk about the different types of stun guns that PA knives store for you.

The cell phone stun gun is a stun gun that just looks like a cell phone. No one might be able to guess if you have a weapon on you. While having the stun gun you get to show off some class along with being able to protect anyone around.

The stun gun flashlight as the name sounds comes with a flashlight. If you are a late-night traveler or someone who has to take on many dark alleys while outside, the stun gun flashlight will best suit. You can easily see any danger from a safe distance and can then stun them with the powerful current of these stun guns.

The keychain stun gun is another two in one product that PA knives have. The keychain keeps your keys safe with you at all times and the stun guns keep you safe from all types of danger. Isn’t it cool to have two features in one thing at a time?

The Best Stun Gun in Town

Now is the much-awaited part for many. On the advice of experts, we have compiled a list of some of the best stun guns available in town.

The DZS Camo stun gun is amazing in many ways. The short cigarette pack of this stun gun makes it fit anywhere, be it your pockets, bags or purses. The stun gun comes with a LED flashlight making it easier to get hold of your target from a distance. The stun gun produces a large thundering sound capable of awakening anybody in the surroundings. The stun gun delivers a current of 10 million volts putting anybody to the ground in a matter of seconds. This amazing self-defense gun comes with a carrying case, a belt loop and has a rechargeable battery.

As the name sounds, this stun gun is tactical. The thing that makes it tactical is the shape this stun gun comes in. It is shaped like a long torch, has a LED flashlight and provides for a firm grip due to its shape. The metal stun gun is aluminum made and is similar to what police officials carry. The gun is capable of delivering 10 million volts, has a safety on/off button and comes with a rechargeable battery. The gun also has a belt loop so that you can carry it on your belts just like the police do.

The DZS key fob stun is one of the hot-selling stun guns that we have. This three in one stun gun has a lot of features. The alarm feature in this stun gun is capable of waking anyone from a deep sleep. This can alert your enemies and can make them run away. The second feature of these smart guns is that they have a LED flashlight which is good to have while walking through dark streets. The third feature is the stun gun. The stun gun delivers high volts that are enough to bring anyone down. The size of these smart stun guns is so small that they can fit in your palm. The stun gun also comes with a micro charging port and a safety switch.

Hand pistols always give a scare. No matter if you are just showing off in your friend's circle or are aiming at an enemy. The look of these stun guns will be enough to keep anyone at bay. However, the DZSS hand pistol stun gun has cool features. It is capable of delivering 10 million volts, has a LED light, it has a trigger button, a safety switch, and a rechargeable. The best part is the small size and lightweight of these stun guns.

As the name sounds, this multi-tool stun gun has multiple features making it a very popular stun gun. The stun gun has a LED light that is bright enough to make anyone blind. The gun operates as a stun gun and is capable of delivering 10 million volts which is enough to make anyone shriek in pain. And finally, the most amazing part of this stun gun is that it comes with a folding knife. All these features make it a superior self-defense weapon for anyone to have. The multi-tool stun gun has a safety lock to prevent accidents and it comes with a powerful rechargeable battery.

The DZS mini keychain gun is one of the smallest stun guns in the world. You can tie it to your belts, can put it in your bags and pockets or can easily carry it in your hands on the go. This stun gun delivers 6 million volts, keeps your keys safe with the keyring, comes with a rechargeable and has a rubber grip that provides great control. The gun also has a safety switch and comes with a nylon holster.

When looking for a stun gun, always make sure to go for multipurpose products. As, when you pick a multi-tool stun gun it is capable of performing a variety of tasks such as keeping your keys safe or showing your danger from a safe distance or alerting people and even protecting you in hard times. Apart from the stun guns mentioned above, you will also be amazed by the variety of other stun guns available in our stores. The other great part about these stun guns is that they come at affordable prices and anyone can benefit from having them. Check out the amazing stun gun for sale that we have and place your order today to get entitled to a discount. 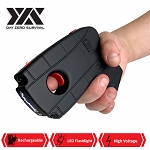 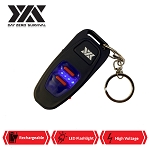