The Wonderful World of Wholesale Swords

In a world full of possibilities and hobbies, wouldn’t it be wonderful to explore where to put all that hard-earned money and where to pick up an interest that can keep you on the edge at all times? That is where we come in with the exciting collection of swords for sale at incredibly affordable prices and pristine designs!

The history of weapons is fascinating and ancient; the first swords ever made date back to 1600 BC to the Bronze Age when the first men developed weapons to help them hunt and protect their land and themselves. The first shape resembling that of a knife or sword was the bronze daggers that were created for the aforementioned purposes. They eventually became both household items, which they still are in every kitchen with different variations in sizes and different uses.

But while the food world is familiar and particularly incomplete without knives, another form is the dagger and the sword and their history are laced with even more excitement. Swords are a symbol of bravery, honor, pride, and craftsmanship across the world.

There are famous swords around the world and they each have an intriguing tale attached to them that makes them even more interesting. This noble weapon has traveled throughout global history. We have all grown up knowing stories about sword-wielding Knights that saved kingdoms and soldiers who went into battle with these weapons. They are both part of human history as well as fantasy and fiction, and hence their importance remains high in both stories and real life.

If you are a sword collector then you probably know that owning finely crafted weapons like swords is a favorite hobby of many fantasy fans and sword enthusiasts. People are endlessly inspired by the grace and making of swords and their various stories. It is according to the legends of battles fought and won, both heroes and villains being slain by the mighty sword and honor defended by worthy soldiers through sword fights that keep this curiosity around their astounding weapons alive to this day.

It is the main reason that people love collecting swords and they are abundant real swords in production even nowadays. But for those of you who have an interest in swords but don’t know whether you want to start a collection, or you think it is an expensive hobby, we are here to tell you that it is absolutely possible to buy swords without flushing your savings.

We have a great selection of cheap swords that are made from high-quality metals but are also available in so many different designs and variations that it will be hard to choose just one to start from. Have a look at some of the amazing wholesale swords pieces we have for you after you learn about the many types of swords that are popular around the world.

The Plethora of Cool Swords To Choose From

Originally created during the Muromachi period (1392–1573) in Japan, the Samurai sword was specifically produced for the Japanese army samurais. These were lethal weapons made with a curved shape and sharp straight edge that was modified with time during the Mongol invasion. While this particular sword came to be known as a katana sword due to its unique shape; it later was also known as a samurai sword because the Samurai army favored these swords and they were highly customized, especially for each samurai. Every soldier had their own unique brand of katana that became their signature samurai sword. They are still known as both a samurai sword as well as generically a katana sword.

The samurai sword was worn top edge in front to be able to draw the sword quicker and strike and kill the opponent, usually with a single swing. If you are a history enthusiast, you will know that something as fascinating as the samurai sword has been around or centuries and their popularity has only gotten bigger thanks to pop culture and legendary cartoons like Samurai Jack and his continuous, dangerous quests.

The katana sword was used mostly in Japan and was popularized there, but they eventually became famous around the world and are still used in Central Asia, but their notoriety has carried through to the USA and all over the world. If you want to own a lethal-looking samurai sword and you’re a movie buff, you should get your hands on the impeccable replica Last Samurai 3-piece Sword set or if you want to professionally learn katana fighting then look at the fully functional and sleek looking Musashi Samurai Katana with free stand and sword bag; available in our collection for your next purchase.

Unlike the honorable warrior samurai of Japan, ninjas came to be known as mercenaries and spies in ancient Japan during the 15th Century. They were skilled in irregular warfare and were known for being stealthy and unpredictable, but the modern world needs no introduction to a ninja because once again the influences of pop culture legends like Teenage Mutant Ninja Turtles is worldwide and impactful.

A ninja sword was specifically made by ancient ninja warriors to use in their missions, they were smaller and easier to carry to get the job done and they were incredibly sharp to project the most force and harm. Affordable, lethal, and beautifully crafted, quality ninja swords are a must-have for any sword collection like the stylish, 27" Black Full Tang Twin Blade Ninja Sword for the amazing price of just $18.39.

There is undoubtedly no shortage of cool swords when it comes to collecting. Even though modern-day fighting and self-defense don’t rely on heavier weapons like swords, they are still relevant in many cultures and are still a symbol of great pride and prosperity. Just owning expensive swords is a status symbol. And it is hard to complete a sword collection without medieval swords. They are the epitome of awesome, as they have so much history and the story behind each weapon and are a true testament to the lethal weapon. For the most enthusiastic of sword collectors, we have the iconic versions of medieval swords like the King Arthur Excalibur Replica Long sword and the equally badass King Solomon Dagger at excitingly low prices!

Another gem of Japanese culture, the animated ‘Anime’ film industry grew with a boom in the United States and it is still a craze among audiences everywhere. Due to the popularity of this film genre, fans are interested in buying and collecting replicas from their favorite series of Anime. We at PA Knives have a diverse collection of Anime swords for all those collectors out there who want to own memorabilia of their favorite shows. You can start your own collection today with novelty pieces like The Kingdom Of Gem sword and a plethora of other collectible cosplay material.

Other than collecting, there are many sword aficionados out there who like to not only collect but also use their weapons, and that includes sword fighters as well. For these people, their collectible items are just as much a sport as they are a hobby. Experts often prefer buying swords that have functional value as well as collectible. Among these options, a rapier sword is a popular option of small-scale swords that are army weapons used in battle for thrusting as well as in the famous sport of fencing. Something like the Silver Steel Wire wrapped Rapier Sword is an exceptionally sleek design to be used by fencing experts and the Three Musketeers fans alike. They are easier to handle and are quick to use when practicing as well as if you want to own a less lethal version of a cool sword than these rapier swords are the ideal and affordable candidates to pick.

Speaking of affordable, sword fighting is a very common sport and has many different genres within them. Usually, when people practice for sword fighting they prefer to use rubber replicas or a wooden sword to avoid accidents and scrapes. For this purpose, there are many varieties of wooden swords available in our store that are handy for practice as well as cosplay and are also quite affordable so you can learn the skill before splurging on actual swords. Buying a wooden sword gives you the benefit of testing your abilities before you make a choice to buy a sword, and like guns, swords also require experience to handle. These swords can be found in different kinds of models so that you can pick the one that suits you according to their use.

Much like prop guns, wooden swords are also a safer option for theatre and stage plays; given their lightweight and safer edge, wooden swords are very common in theatre. We stock an array of practice wooden swords for your benefit that are available in wholesale as well as individually. Our job is to ensure that whatever our customers want to add to their collection and to their skill-set, we can provide the right products for it, so have a look at our diverse sword collection and find the one that you like. 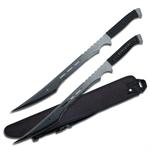