What Is The Most Common Ninja Weapon?

The world of weapons in itself is wide enough, but ninja weapons are a whole group as well. They were all invented with crucial detail and many for specific needs. That also encouraged the growth of ninja weapons as time went by. If you look at the incredible types of weapons, the most common ninja weapon would be the throwing stars and nunchucks. These are two very specific kinds of weapons that define the idea of ninja fighting and principles. Unlike the weapons that you get nowadays, these two are unique and also define the technique of Martial Arts.

Most Ninja Weapons are actually created to enhance your inner strength and focus. When you look at the traditional nunchucks, it is hard to imagine them being any other way. They are so native to the ninja culture that they will forever be associated with it as well. Nunchucks are wooden sticks combined together with chains or ropes. You will now find multiple versions of these being made in wood, metal, rubber, and foam for practice and use. The other one, throwing stars are perhaps the most notorious but classic ninja weapons as well. Created with thin metal disks, these stars are jagged and meant to be flung in the air.

The Specialty Of Real Ninja Weapons

Even though they are a common phenomenon now, ninja weapons were not so huge earlier on. If you know their history, you will know why they are so unique and took time to become mainstream. The real history begins in Japan in the 12th Century with the tyrannous military rule. Civilians were not allowed to use any kind of weapons. To protect themselves, these lowly farmers decided to improvise weapons out of material they had. This led to the invention of most weapons like nunchucks, bo staff, throwing stars and knives, and more. The defense had to take place discreetly so the weapons won’t be confiscated. This also led to them using wooden items, ropes, nails, and other things that won’t come across as weapons.

From there, the real test of skill in ninja weapons is innovation and agility. They were able to protect themselves with these homemade weapons that became quite famous afterward. But it was ultimately their simplicity that became more popular with these weapons. A branch of these specific tools was adopted and popularized by mercenaries and agents to fight the tyrant regime. Ninjutsu was the technique in martial arts that began to use these weapons to treat proper self-defense and attack. They relied on subtlety, speed, and slickness to make them work in difficult situations.

The Growing Interest in Ninja Weapons

There is no question about the popularity of ninja weapons in the United States now. Thanks to Kung Fu coming to Hollywood with Bruce Lee, martial arts have already become quite famous. He used a number of ninja weapons on his action scenes in films that became fan favorites. Soon after that, we saw a boom in people wanting to buy ninja weapons and learn martial arts. The trend in America is still going pretty strong but the weapons are becoming even better with time. You will see more and more content created around it, especially in merchandise, like ninja turtle weapons that are also inspired by real ones.

If you are looking to acquire or admire these weapons, they are available in the market. As more people like to learn with them and also own them, they are both training tools and artifacts. Some would like to buy them so they can actually train with them, and some would like to collect them. There is no denying that ninja weapons are still just as alluring as they were years ago. You can now find swords, staff weapons, throwing knives and stars as well as nunchucks easily.

Types Of Ninja Weapons And Gear

The whole concept of ninjas is pretty mysterious to most people. That is also the real attraction behind their popularity as well. If you look at the multiple tools and weapons you can find, some are more pivotal than others. Ninjas were not ordinary people, but experienced fighters specializing in stealth. That required a proper get-up, as well as the right kind of weapons to fight back and protect the people. If you are genuinely interested in ninja training, you should look at ninja weapons and gear.

As far as getting up or gears are concerned, there is a specific kind of get-up you can get. Ninja masks and boots are designed to hide their identities and make them unrecognizable. The boots are also heavier and made in a way they can absorb the sound of footfall to stay as stealthy as possible. You will also find gloves, sword slings, and arm gauntlets, all meant to keep small and large weapons on you at all times.

The weapons themselves on the other hand are of different types as well. You can get multiple kinds of blades and swords that are thin, sleek, and lighter so they can be carried well. Then throwing knives and stars are meant to deflect the opponents and nick them on open flesh. You will find these stars in multiple sizes, pointed edges, and even materials if you look at good stores. Nunchucks and bo staff are regular training weapons for core strength which are available at sports stores and martial arts training centers.

If there is one place that can get you the most impressive kinds of ninja weapons, it's online stores. You can search all you want but you may not get the variety you are looking for anywhere else. One solution is to look for affordable, wholesale weapons, and what better place than PA Knives. Our online store prides itself on stocking high-quality, authentic, and reasonably priced ninja weapons.

Whether you buy one or a whole kit of ninja equipment, the price should not slay you in the process. We specialize in wholesale ninja weapons that are half the market rate but full in quality. 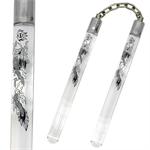 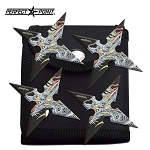