When You Should Use Pepper Spray?

There are times when we need to fend for ourselves and make sure we have something to fall back on. In this day and age, protection is not just up to the police but also to the civilians themselves. When there are situations where you feel threatened, there are some basic steps you can take. One of the first is to acquire a good self defense weapons. Pepper spray is an option that can work really well with basic street crime. If you are wondering, when you should use pepper spray, the best time is harassment, assault, robbery, or pursuit. Anything that can be deterred with a powerful pepper spray.

The basic properties of pepper spray are a mix of pepper oil, aerosol liquid, and various stinging chemicals. They are all meant to cause temporary blindness when sprayed in the eyes and face and make you disoriented. When sprayed onto someone, they will inhale the spray and their vision will be compromised. This is a good way to make sure someone violent or persistent cannot harm you further and even chase you. For the most part, pepper sprays are not lethal and will work strongly in the first 20 minutes, after which they will wear off. This is a weapon that can do the job without lasting effects or fatal consequences.

Which Is Better – Pepper Spray Or Guns?

If you talk about safety, many people in the United States believe in keeping guns and using them. For self-defense, guns are usually a tall order and unnecessarily dangerous and invasive. Most people don’t know how to use them or maintain them to keep them away from danger. On the other hand, something like pepper spray gives you the chance to alter a dangerous situation without insinuating circumstances. You cannot reverse a mistaken gunshot, but any dose of pepper spray will wear off and have no lasting side effects.

The other issue is that everyone is not comfortable operating something as technical as a gun. They are meant to be handled by professionals or something to the effect. If someone buys a gun thinking they will defend themselves, oftentimes they end up causing more harm than good. Devices like pepper sprays are easy to use and still effective enough that they won't cause emergencies.

Of course, for many of us, the best instance of using pepper spray is when the police use it. It is part of their uniform, and they are legally obliged to keep it on them for multiple reasons. It is the last resort to tackle a criminal if you do not have any other weapon on you. Secondly, police pepper spray is used to subdue large crowds in riots and protests if they get out of hand or dangerous. Police can also use them on criminals that are out of control or threatening to the point of fatal. Normally, the police pepper spray will be a lot stronger than the normal pepper spray because they know when and how to use it. They will also have to deal with more challenging instances than normal people.

The second instance where pepper spray has proven to be very effective is harassment and assault on women. It is no secret that women tend to face more violence in the public than men. They need something that can help them deter dangerous people or escape dangerous situations. Pepper spray is very ideal for that sort of situation where you need a quick fix to get out of an unsavory situation. It works really well for assailants and predators because they can lose focus and you can escape unscathed. That is one of the reasons that pepper spray for women is not becoming a major preference all over the country. There are even multiple kinds of nifty inventions in pepper spray packaging that privilege women. You will find a lipstick pepper spray as well as a tiny keychain spray that is meant for discreet carrying. Women can take them into highly-guarded spaces without issue and keep themselves safe.

Is It Legal To Use Self Defense Pepper Spray?

The United States is among the few countries that have legalized the use of pepper spray in almost all the states. It is now categorized as a preferable self defense weapon that is legal for civilians to carry in public and use. Even the cases where pepper spray is used is seen as an effective strategy to tackle street crime. There are, however, regulations during transit and travel when carrying pepper spray.

You need to check your state laws about carrying pepper spray on the train or plane. Usually, you are allowed to carry pepper spray in your check-in luggage, and it has to be less than 100 ml. You can easily find a can of small pepper spray that can stay with you when you are travelling. The danger is the pressurized cabins where they can burst and hurt people. Other than that, there are some offices and official spaces that will disallow pepper spray, but most will not. Since many of the cases of harassment or assault happen in social or secluded spaces, carrying pepper spray as a self defense weapon is legal.

Get The Strongest Pepper Spray At PA Knives

If you are already sold on the idea of pepper spray as a viable weapon, you should get it. For those of you, who can’t find it in local stores, head to PA Knives online weapon store. We have one of the best collections of pepper sprays in one space you will find anywhere. From the strongest sprays used for defense and police to the small variations for transit, we have it all. Our store hosts an array of affordable sprays that are easy to replace and buy at your own discretion. Safety should be accessible to everyone, and that is what we ensure for all our customers. 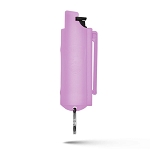